We are pleased to announce that a profile of Cameron/McEvoy appeared in the May 6th issue of Forbes. The firm was one of only six law firms in the Mid-Atlantic region to be featured in this well-respected business publication. Read the article below or Download (PDF). 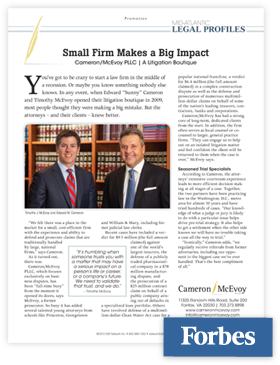 You’ve got to be crazy to start a law firm in the middle of a recession. Or maybe you know something nobody else knows. In any event, when Edward “Sunny” Cameron and Timothy McEvoy opened their litigation boutique in 2009, most people thought they were making a big mistake. But the attorneys – and their clients – knew better.

“We felt there was a place in the market for a small, cost-efficient firm with the experience and ability to defend and prosecute claims that are traditionally handled by large, national firms,” says Cameron.

As it turned out, there was.

Cameron/McEvoy PLLC, which focuses exclusively on business disputes, has been “full-time busy” from the moment it opened its doors, says McEvoy, a former prosecutor. So busy it has added several talented young attorneys from schools like Princeton, Georgetown and William & Mary, including former judicial law clerks.

Recent cases have included a verdict for $9.5 million (the full amount claimed) against one of the world’s largest insurers, the defense of a publicly traded pharmaceutical company in a $78 million manufacturing dispute, and the prosecution of a $25 million contract claim on behalf of a public company arising out of defaults in a specialized loan portfolio. Others have involved defense of a multimillion-dollar Clean Water Act case for a popular national franchise, a verdict for $6.4 million (the full amount claimed) in a complex construction dispute as well as the defense and prosecution of numerous multimillion-dollar claims on behalf of some of the nation’s leading insurers, contractors, banks and corporations.

Cameron/McEvoy has had a strong core of long-term, dedicated clients from the start. In addition, the firm often serves as local counsel or cocounsel to larger, general practice firms. “They can engage us to help out on an isolated litigation matter and feel confident the client will be returned to them when the case is over,” McEvoy says.

According to Cameron, the attorneys’ extensive courtroom experience leads to more efficient decision making at all stages of a case. Together, the two partners have been practicing law in the Washington, D.C., metro area for almost 50 years and have tried hundreds of cases. “Our knowledge of what a judge or jury is likely to do with a particular issue helps drive pre-trial strategy. It also helps to get a settlement when the other side knows we will have no trouble taking a case all the way to trial.”

“Ironically,” Cameron adds, “we regularly receive referrals from former adversaries, including our opponent in the biggest case we’ve ever handled. That’s the best compliment of all.”

Article text taken from the May 6th issue of Forbes Magazine.